Outliers: The Story of Success by Malcolm Gladwell 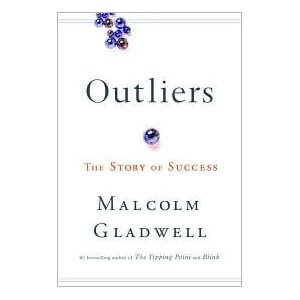 The dean of my college gave all the faculty this book.  I really enjoyed reading it.  It was a page turner that made me think a lot about success in my own life.

I really liked the beginning story about the Canadian Junior Hockey League.  As Malcolm points out, most of them are born in the first three months of the year.  Why? When the boys are 11 years old they get evaluated and the good ones are chosen to be in the better leagues.  The problem is that the boys that were born in December are competing with the boys that were born in January, so the boys that are 11 months older (and that much bigger and more mature) are more likely to be selected to play for the better coaches, play against tougher competition, and have more practice time. So the boys born in December have a huge disadvantage.

This happens with public education as well, except the cut off time is August, not January.  So, as you would expect, kids born in August, September, and October have an advantage over kids born in July.  They perform better on tests and assignment, get assigned to more advanced classes with better teachers, get into better colleges, etc.

This is just one example Malcolm gives in his book.  He gives many other examples, including the advantages that  Bill Gates, Bill Joy, and the Beatles had in their lives.

I did, however, have a couple of problems with the book.  First, all of his stats and stories seem to be cherry-picked.  He only tells stories and relates statistics that support his point of view. Of course, I would expect this from anyone, but it just seems that he is overselling their significance and ignoring any contradicting evidence.

I do agree with Malcolm that we have to provide more people more opportunities for success.  However, I was a little disappointed that Malcolm didn't go on to say that as people, we need to look for our advantages and then use them for our success.  We need to find out how we are different, identify what advantages we have, and then work really hard to achieve the success that we want using those advantages.
Posted by Unknown at 7:08 AM 3 comments: